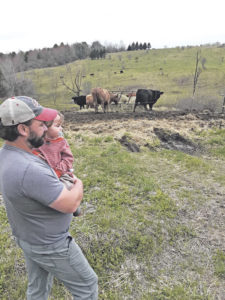 Josh and Katie Wenger did their research – a lot of it. He grew up in Maryland and joined the Army, and she was a Navy brat. When it came time to leave the service and settle down on a farm homestead, they wanted to make sure they did it right.

They started shopping for property in 2015. He flew into Dulles International Airport outside Washington, D.C., from a deployment in Germany, and together they drove up to Corning, NY, and began a tour throughout the Northeast. They had originally put together a list of over 100 potential properties that they might consider home; the tour included 25.

The Wengers eventually decided on a site just outside Cooperstown, NY. “We bought the property in March 2017, and we bought our first animals that August – a bull and two heifers,” Josh said. And so began Warrior Ethos Farm.

While their extended families have various levels of farming experience, no one close to them did. Farming was their dream. “I was obsessed with farming since I was five,” Katie laughed. “I used to draw out my dream farm on paper, with exactly how I’d lay out my farm. I was horse obsessed but then it grew into ‘I want all of it.’”

Today, they’re doing a lot of it. Katie said she became a voracious reader of all things farming, and noted that she learned a lot through Cornell Cooperative Extension programs.

The majority of their 91 acres is pasture. They raise all colors of Irish Dexter, both horned and polled. Irish Dexters are about half the size of Herefords and were considered a rare breed until fairly recently (as the Livestock Conservancy now labels them a recovering breed). Katie said, “We were looking for the perfect homestead cows, and they fit the bill. They’re docile, hardy, they make great mamas and they do awesome on pasture.”

As of the end of April, Warrior Ethos was home to 15 heifers, 10 weanlings, five two-year-olds, a bull and two calves. Josh said peak production for them would be about 60 head. The Dexters are 100% grass-fed and grass-finished.

They open up their big hill pasture in quarters come springtime and keep the different ages of cattle separate. They are rotated through each pasture weekly. The Wengers buy small square bales from their neighbors for winter, as well as some larger bales from other farmers farther out.

“We had to add a selenium block because we actually had a deficiency, which was funny, because we were so concerned about them getting too much,” Josh said.

A former “horse girl,” Katie said the original farm plan was to raise horses and chickens; the small herd of cows would be just for the family. Then people started stopping by, asking if they were selling beef.

“Our goal is to be able to slaughter 10 to 15 a year, and we sell by word of mouth and through our website,” Josh explained. They use the services of Trinity Meat Company in nearby Hartwick, because he said they offer the best packaging and the best cuts. This year, they also started selling beef at the co-op in Richfield Springs. Last year was their first year offering their meat to the public.

Their horses are brood mare Friesians, a breed in which “beauty meets sweet, gentle nature,” according to Katie. She added that their reproductive vet work and hay are the biggest expenses the farm has.

In addition to that, they raise free-range chickens and sell their eggs, and they breed and sell German shepherds too. The next venture is getting a U-cut Christmas tree farm up and running.

Their house, an 1803 Colonial, is also offered up as a bed and breakfast with four rooms available. Before the pandemic shut a lot of tourism down in Cooperstown, they often hosted families on vacation.

The warrior ethos states “I will always place the mission first. I will never accept defeat. I will never quit. I will never leave a fallen comrade.” Although Josh and Katie’s missions may have changed a bit, they still honor the soldier’s creed by putting their all into their farm.