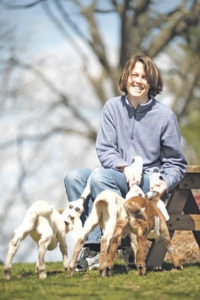 Valley View Farm is the only working dairy in Topsfield, MA. It is home to a milking herd of 40 Nubian goats and their owners, Elizabeth and Peter Mulholland. The couple became interested in goats when they were dating.

After they got their first goats, “two goats became four, became 12, 24, and now we milk 40. We built a dairy in the barn and became licensed in 1998 to make and sell cheese,” said Elizabeth. Their goats each produce an average of about a gallon of milk daily. They make 6,000 pounds of cheese a year. They buy small quantities of milk from Appleton Farms in Ipswich/Hamilton, a property of the state’s Trustees of Reservations, and make cheese for them, as well as their own line, Valley View Farmstead Cheeses, doing both cow and mixed milk styles.

As their love for goats grew along with their herd, the couple decided to live at Elizabeth’s mother’s, Mary Brown’s, farm. “The house was too big for her to keep alone and we both loved the country life. Peter is an investment advisor and I was a historic preservation professional,” said Elizabeth, who still volunteers and consults. Her parents had bought the home in the mid-1970s. Her mother had grown up on a working poultry farm. Her father, the late James Brown, had gained experience working on area farms throughout his youth. He considered becoming a big animal vet at Cornell before honing in on becoming a doctor for people. Her parents raised chickens, turkeys and sheep and had a large vegetable garden, so Elizabeth’s youth was steeped in many things agricultural.

Elizabeth tries to work in a historical angle by naming their cheeses with historical or geographical references, when she can: Their Camembert style is called New Meadows, which is an old name for Topsfield.

Their soft goat milk cheddar-style cheese is named Topsfield Tuffet, while Pingree Hill Tomme is named for the drumlin, shaped like an inverted spoon, that their farm sits on. Both of them are aged in their 16-by-30-foot cheese cave, which is built into the hillside of their property near their dairy, using concrete bridge arches. “The earth keeps the temperature and humidity right for aging cheeses,” Elizabeth said.

While their farm is about seven acres, they hay another 20. They keep their dry stock on other farms, which they call foster farms. “Each year, they return last year’s goats to us, and we get a crop of new kids,” she said. Kidding season begins in March.

“Personally, I enjoy the animal care the most. I like to keep track of their genetics, tracking offspring, production, appraisal information, etc., with the goal of improving the herd so that each animal is producing the most milk possible for eight to 10 years. I also really like the baby goat season, as having 75 to 90 kids, while exhausting, heralds the spring and is life-renewing. Plus, they are really cute,” said Elizabeth.

Her mother Mary, 81, works daily at the farm, as do Peter and Elizabeth. Peter works at the farm before and after his day job and on weekends. Their sons, Andrew, 22, and Henry, 19, help on the farm when they’re home.

The couple’s friend James Eveleth keeps the breeding bucks at his Salisbury home. He grew up in Topsfield, showing goats in 4-H. Topsfield resident Megan Brown helps out with milking most mornings and evenings. “Other friends in the community help out a lot too, whether it is feeding baby goats or delivering cheeses. It has been a real community endeavor and we feel very blessed to have such support,” said Elizabeth.

They have a farm store that is open daily and an online store at valleyviewcheese.com, where customers can order cheeses, eggs, maple syrup and honey that they produce at the farm, as well as soaps and lotions and specialty foods and set up a pick-up time. Their cheeses are also found in local stores, farm stands and cheese shops.

“We all love working on the property and living here. We have an open-door policy for our friends and family. I think people feel really good about coming here, knowing us, seeing the farm and buying our products,” said Elizabeth.