A heifer is not a cow 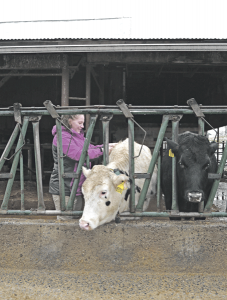 Raising dairy heifers is different today. Rather than being relegated to distant lots and fed poor quality hay, heifers are fed and housed to prepare them for future production. Most changes in raising heifers are a matter of economics, with a fine line between profit and loss.

But a heifer is not a cow. Dr. Jud Heinrichs, professor of dairy science at Penn State, discusses how raising heifers has evolved. “In the last five or 10 years, a lot has changed, and rapidly,” he said. “Five years ago we didn’t talk about heifer numbers because we thought we needed one heifer for each cow. Now it’s 0.6. A lot of farms haven’t figured out how to catch up with this, but we have to do it.”

Heinrichs said low cull cow prices have been the primary driver for this change. “We’re spending around $2,000 to raise a heifer, but cull cow prices are around $800,” he said. “The culling decision is huge, and we’re culling cows we don’t really need to cull.” Heinrichs added that he sees many herds in which close to half the milking herd are first calf heifers.

Culling cows while maintaining herd size usually means more first calf heifers are being milked, which results in milk loss. Heinrichs said that no matter the genetics or feed program, there’s a 15% loss in milk when heifers comprise a large percentage of the herd. “She physiologically can’t make 100%,” he said. “She’s making 85% of a mature cow, and the second lactation is at 95%.”

Another change is better animals. “Ten years ago, the culling rate for reproductive problems was high,” said Heinrichs. “We’ve learned how to do a better job getting cows bred back, and we figured out how to take care of feet and leg problems. Think of how many cows were culled 10 to 15 years ago because of warts and other foot problems.”

While breeding companies will emphasize the importance of continually improving the genetics of young stock, Heinrichs said the difference from one year to the next isn’t significant. “We have to quit culling for that little bit of extra genetics,” he said. “You still have to go for the best genetics, but you have to keep at it for 10 years before it becomes economically important.”

With limited forages and limited money to spend on feed, feeding 10% fewer heifers allows more forage for cows. “Years ago, a greater percentage of forages was ‘heifer hay and heifer silage,’” he said. “Now there’s a higher probability that the forage you’re putting up is something you can feed to a lactating cow.” But it’s a delicate balance – overfeeding heifers costs money.

There’s also a significant change in age at first calving. “It costs about $100 to keep a heifer that’s 20 months of age or older in the heifer barn for one month,” said Heinrichs. “Any time you can reduce the age at calving, you’re saving $100. If you get down to 22 months, you really start saving.” However, Heinrichs warned that calving at less than 21 months is harmful because most heifers haven’t reached sufficient size.

Heinrichs said Holsteins start cycling by nine or 10 months, and heifers not cycling by 11 months should be culled. “If you go to the semen tank to breed a heifer and she’s going to be 25 or 26 months before she calves, she should probably go on the truck because she’s going to cost you $200 to $300 more to keep,” he said. “You’d be ahead to sell her.”

Ideally, the weight at first breeding is at 55% of mature body weight, which for most Holsteins is about 775 pounds. “We need to work more on that and find out what a 775-pound heifer is, and that’s the reason to use a weight tape,” said Heinrichs. “Weight at calving is lighter than we used to aim for, and has more to do with structural growth. Weight can be a problem if heifers are too heavy.”

Reduction in age at first calving translates to feed savings. “When animals have the same 305-day milk production, it’s easy to see which are economically better,” said Heinrichs. “The economics are at 21 and 22 months.” Heinrichs added that in the past, breeding age was more of a mindset than the inability to raise big enough heifers to calve at a younger age.

At the onset of puberty, heifers stop putting on muscle and start to put on fat. “It’s a hormonal change,” said Heinrichs. “We can’t do anything about it. Her growth rate slows, so we don’t need to feed extra protein. Protein is always more expensive than energy, so it doesn’t make sense to feed protein she doesn’t need.” Heinrichs said overfeeding that results in excess weight from fat affects mammary development, and recommends using a weight tape to ensure heifers are not gaining too much. It’s also helpful to secure a height stick in an area where heifers pass by frequently so herdsmen can observe growth.

Although animals don’t reach mature weight until the middle of the third or fourth lactation, many are culled prior to that. “Every time you cull an animal before the end of their third lactation, you’re losing money on her,” said Heinrichs. “We have to stop culling as heavily. It takes more time to work with an older animal, but the payback is there.”

The major consideration for heifer nutrition is energy. “We know how to raise good forages,” said Heinrichs. “We know how to keep fiber and lignin levels low. For protein needs, a heifer is not a cow. When the animal hits six months, she can manufacture all protein requirements in her rumen. Some people add straw because the forages are too good. But if you put straw or stover in a heifer diet, you’re paying for it at least twice: once because straw costs money, and the other is the energy cost of digesting feed – moving feed from the mouth to the back end. Straw costs more energy than what she’s getting out of it.”

Udder edema can be problematic in first-calf heifers because their physiology is different – lymph doesn’t circulate back to the heart like it does in cows. Edema can be avoided with exercise along with reduced salt and mineral intake.

“We have to constantly remember that a heifer is not a cow,” said Heinrichs. “They eat differently, their requirements are different and we can take advantage of that better than we have in the past. We’ve made big strides in age at first calving, and we’re going to make bigger strides in feeding.”