A farmer and his congregational cows 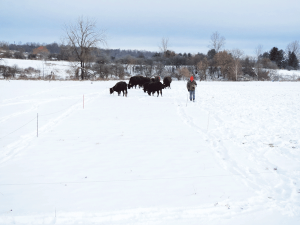 CLINTON, NY — Twice a day, every day, Lawrence Gilley makes a pilgrimage into the fields at Keyes Brook Farm to move his herd of iconic American Milking Devon cattle to fresh pasture. “I call them my congregational cows because in 1623, two heifers and a bull were brought over from England to Plymouth Rock by the Pilgrims who were Congregationalists, a Protestant denomination,” said Gilley.

The passion for cows came when Lawrence was 11 years old and worked summers on a dairy farm in Ulster County. “I was hooked and had a life-long dream of raising my own cows,” said Gilley.

That vision was mostly deferred as Lawrence became a minister, teacher and performed United Church of Christ missionary services for Congregational churches throughout South Africa. For over 38 years, Gilley and his wife, Carol, trained church leaders and led worship services in the “cattle cultures” of very rural communities. “We learned how important and honored the cows were to small subsistent farming villages,” said Gilley. “We saw how folks took care of animals with herding and practically no inputs.”

The Gilleys took sabbaticals during their tenure, back in the states, visiting and staying with Lawrence’s sister in Clinton, NY. As “retirement” was nearing, the former Joe Zombeck farm and its 32 acres, house and barns on Route 12-B, came up for sale in 2001. With some parental influence and good karma, the Gilley’s daughter, Sharon and husband Mackay got job offers at nearby Hamilton College and the family forged ahead with buying the property and starting the small farm with Keyes Brook gently flowing through the property.

In divine retirement fashion, Lawrence noticed some Red Devon beef cattle grazing on a neighbor’s property in Deansboro. “I was hooked on the deep roan color and got really excited when I saw the oxen at the Farmer’s Museum in Cooperstown,” remarked Gilley. “My passion stirred from the storied history of the dual purpose Milking Devon and their contributions to life in New England.”

It just so happened his work to raise this heritage breed of American Milking Devons was desperately needed, as their numbers had dwindled to fewer than 100 head back in 1970.

“In the mid-1970s, during preparation for the American Bicentennial Celebration, Old Sturbridge Village attempted to upgrade the authenticity of their agricultural interpretation by exhibiting appropriate breeds documented in their respective archives. The historic documentation indicated that Milking Devon cattle should be one of the centerpiece breeds. The difficulty in finding this once popular breed was the inspiration for the creation of the first North American livestock conservation organization, known today as The Livestock Conservancy,” he explained.

The Gilleys’ settled on the preservation path and the breed, but where could some be bought? “We went to the old school directory and wrote lots of letters asking if anyone had one heifer so we could start our journey,” commented Gilley. As fate would have it, they got the phone call and visited a plain community farm owned by John Coffer in the Finger Lakes, who had some stock to sell. In typical farming tradition, they got a bit more to start with — two bred cows and a bull. This was a déjà vu moment indeed.

The goal was always to use the farm as a pasture-based operation and to stay small and manageable. The family built fences, renovated the barns, refurbished an old shed into a “pavilion party spot,” did house maintenance, and planted a hardy garden along with propagating an orchard, Honey locust living fences, gooseberries, currants and flowers for their popular farm stand. They have enough equipment to make 1200 square bales to supplement the herd of 12 during the winter. Another aspect that became appreciated was getting knowledge about pasture management and pushing the boundaries of traditional grazing days.

“It’s been great to participate in local pasture walks, go to forward-thinking conferences and be a subscriber of the Graze Magazine and Country Folks,” said Gilley.

The pasture craftsman moves his herd of 12 twice a day with portable fencing according to observation and a meticulous, monthly grazing chart. He habitually gets over 250 days of grazing per year. “Moving cows has many benefits: It’s good for my health, good for cow and soil health, good for my wallet and it’s just plain enjoyable being out here,” said Gilley. The activity is also a source of daily spiritual devotion as he lost his beloved wife and partner in 2016.

At the thrifty age of 81 years old, passers-by marvel at his grazing skill and commitment to graze the cows through the snow. When the pasturing is over, he starts back at the first paddock and stages his small squares and feeds them where he made the hay during the summer, still moving the fences twice a day, to keep the manure distributed and pugging to a minimum. Once in a while someone will question these “red cows” being out in the open field during a snow event but don’t realize they have full access to shelter and hay back at the barn if they want it. The historic, hardy Devons actually prefer the management Lawrence provides and can be seen (or unseen) bedded down out in the paddock during a storm.

When asked about quitting his cow and pasture passion, the Webmaster for the American Milking Devon Association said, “My hobby is my true ‘social’ security. With over 1700 animals now in existence and new people coming on board excited about small scale farming, it’s a great time to be a cheerleader and mentor to my fellow farmers”.

“The question reminds me of what a retiring Episcopalian Bishop from Swaziland said to me. ‘Ya know Larry, I’m going home to Lomahasha and sit on a hill and watch my cattle.’”