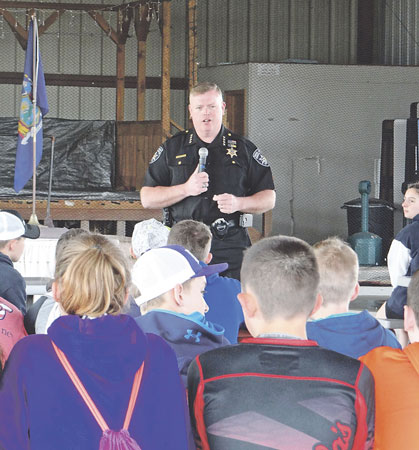 “Follow your dreams,” advises Rob Maciol (aka Sheriff Rob Maciol, Oneida County), whose fond memories of visiting and working on his uncle’s farm, have brought him back to the farm, where he says he has always wanted to be.

“My mom is one of 10 children, she was born and raised up here in Holland Patent,” Maciol explained. “The farm she grew up on is about 2 miles from where we are right now.”

Maciol’s grandfather was a dairy farmer, and his three uncles were also dairy farmers, although they’ve all since retired from dairy farming now.

“I was born and raised in New York Mills, which is a suburb just outside of Utica. But, as little kids we used to visit the farm all of the time, because my mom would always come back here on weekends and holidays.”

Maciol says when he got to be 12 or 13 he started working for one of his uncles on his dairy farm, just about 2 miles from where his farm is now.

“I helped summertime with the hay — and in the fall, we’d chop corn, weekends, year round, I’d be up there helping him. I loved anything to do with the farm. I got hooked as a young kid. At that point in my life, I always wanted to be a farmer. That was my goal; to become a farmer.”

Maciol says he worked on the farm until he graduated high school, when he began to look at other careers and joined the volunteer fire department in New York Mills. Since, the fire department and the police department were closely affiliated, Maciol became friendly with police officers and decided to pursue becoming one of the police force.

“But, at the same time I never forgot the farm thing.”

Maciol’s wife, Tammy also grew up on a farm in New Hartford, although they never met until they were in their early 20s.

“We had farming in common and decided that we would love to have our own farm if we ever had the opportunity. We’ve always had that idea in the back of our minds. We were young and I was a brand new policeman and she was just getting started in a career, then we started having children — we have three children, so, we were in no position financially to buy a farm or start farming. But, we never got that idea out of our heads.”

Maciol said weekends the family would go for rides in the country looking at farms and they always attended Empire Farm Days and other agricultural events.

“We just always had that ‘farm thing’.”

By 2011, when Maciol won the election as Oneida County Sheriff, the children were growing up and Tammy had a secure job in New York Mills School District, so things were a little more relaxed financially. That’s when the couple decided to get serious about looking for a farm of their own.

“But, every farm we found was either way out of our price range or the farm was nice, but the house was shot. We could never find the right thing.”

Rob say they “stumbled” on the farm they bought and it wasn’t even on the market.

“The folks that were living here were telling some friends that they were thinking about selling. They had a chance to buy a newer house down the road and they wanted to get into a ranch house because they were getting a little bit older.”

After visiting those folks, “one thing led to another and we ended up buying this farm. We found our little dream farm.”

Originally a dairy farm built in the 1800s, the barns had been vacant for several years.

Because the family worked off of the farm they could not commit to running a dairy farm, so they decided to go with beef.

“We looked at all kinds of breeds and we decided to go with Herefords. Their temperament is so much better than some other beef cows.”

“I do raise some Holstein heifers, because I still can’t get the dairy farm out of my system from when I was a kid,” admits Maciol. “We raise them, cross them with the beef, keep the calf and put them back on a dairy farm for milking and they can live their adult life out as a dairy cow.”

Currently Maciol’s have 30 head of Herefords with a goal of 50 head. A few are Holsteins crosses.

Heifers are bred at about 18-months-old or closer to 2-years old. Steers are sent to slaughter at 20 months.

“We use a bull on the farm for live-cover, sell it after two years to avoid in-breeding, and then bring in a new bull. We keep track of breeding dates the best that we can. We put the bull out in August and try to watch as best as we can, so we get a general idea of breeding dates. I have a chart in the barn and we write down dates. Obviously we don’t get all of the cow’s dates, ‘cause we’re not here all day long — and a lot of times on the warm days we don’t see the cows because they go way down into the woods where it’s cool.” 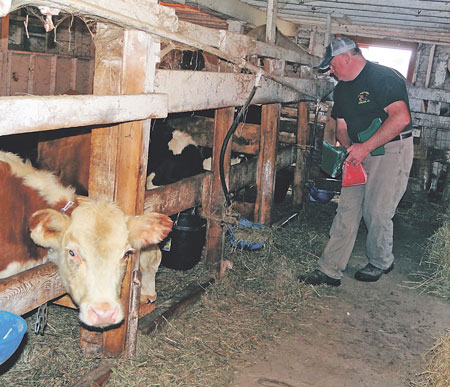 However, Maciol says they have a goal of the cows calving in the late spring during May and June, in warm weather.

“We’re pretty confident that after three months every cow that needs to be bred is bred.”

Even so, this year two cows did not calve.

“So those are the two we watched closer this time.”

Both were covered this year.

“If it happens again I am going to have to consider what to do with these cows, because it’s not productive to just feed these girls all year long if they’re not going to get bred.”

Maciol says they have not had any difficult calvings but did have one premature bull calf out of a first-calf heifer that was already bred when they got her.

“She refused to have anything to do with the calf. She didn’t look like she was ready to calf and I didn’t know she was due yet. So, I went down to the co-op and bought bagged colostrum and Robby (Maciol’s son) sat in the barn all day with that calf. We didn’t think he was going to make it and now he’s 7 months old. He’s small, but he’s still growing.”

Marketing is only by word of mouth and repeat buyers come back each year.

“We have eight or nine regular customers that once a year buy either a quarter or a half cow. We sell four or five beef cows a year. I think the important thing, as far as small operations like ours, is we can guarantee a high quality product to people that buy from us. The big thing now is ‘Farm to Table’.”

Maciols are new to the NYS Beef Quality Assurance program and are in the process of becoming certified in the program through Oneida County’s Cornell Cooperative Extension’s Chute-Side Training clinics.

“We take very good care of our animals,” attests Rob. “We use Countryside Veterinary services from Lowville, they come routinely about twice a year.”

Cows are fed baleage and a 14 percent beef feed mixture from the Holland Patent Co-Op.

Only a small amount of grain is fed to each cow to train them and keep them socialized.

About 26 acres is used for pasture.

Neighbors and cousins help with sharing hay and Maciol helps them with tractor hours.

“I am blessed that we have amazing neighbors and family up here,” said Rob. “My day job is crazy. I love it and my heart is in police work. There’s nothing like being the sheriff, which is the highest law enforcement official in the police structure. I’m elected by the people of Oneida County, which is neat. It’s the only elected law enforcement position in our governmental structure. But at the same time, I get to come home to this every day. It keeps me in shape, but it also clears your mind. Country life is great.”

“My only regret? I wish I’d done it sooner.”