A day at the Genesee Valley Hunt Races

Dark overcast skies did not dampen the spirits of the incredible spectator turnout for the 92nd running of the National Steeplechase Association (NSA)-sanctioned Genesee Valley Hunt Cup. This event, also known as the Genesee Valley Hunt (GVH) Races and Fall Festival, takes place at the Seven Nations Farm just north of Geneseo, NY. The venue attracted approximately 35,000 spectators from the region. 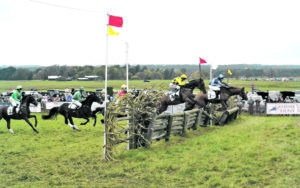 The GVH Race Meet first took place in 1892 and later was one of the first sanctioned steeplechases in America. This event attracts accomplished steeplechase competitors from all over the Eastern seaboard. All steeplechase horses are Thoroughbreds whose lineage must be proven with official registration papers. Horses can begin their steeplechase careers at age three, and some compete until age 10 and beyond. The ideal steeplechaser has speed, stamina, athletic ability and the boldness to run at speed and jump solid timber fences of a height of three feet or greater. The jockeys must be fit, courageous and good strategists to win on a course that is approximately three to 3.5 miles in length.

The official first and second place winners of the horse races are:

The Martha S. Wadsworth Memorial is a sanctioned maiden timber race. It’s open to four-year-old horses and older that have never won over timber. The race has a three-mile course over very solid challenging fences. The footing was quite slick, with the ground saturated from previous rains. Only two horses and riders out of seven finished the race, and the winner Withoutmoreado was ridden by a spectacular steeplechase jockey, Skylar McKenna. This young lady from Pennsylvania set a record for the GVH Races, winning all the NSA-sanctioned races on different horses.

In addition to the timber races that have a total of $45,000 in purses, there are activities for the entire family to enjoy. Canine events showcased the agility and athleticism of man’s best friend. The dog events include a Jack Russell terrier race, a sled dog demonstration, the Canine Grand Prix of dog agility, the Parade of GVH Hounds and a wiener dog race (for dachshunds and other similar breeds). It was amazing to see such a large pack of well-trained foxhounds respond to the huntsman’s horn. Marion A. Thorne, MFH, and huntsman, dismounted from her horse and invited children and parents from the audience to greet the hounds. Children were invited to participate in the Stick Horse race, pony rides and take a horse-drawn wagon ride. The Agri-Center tent hosted a petting zoo and activities such as roping a straw steer with lariats and riding a straw bale pony.