A closer look at navicular disease 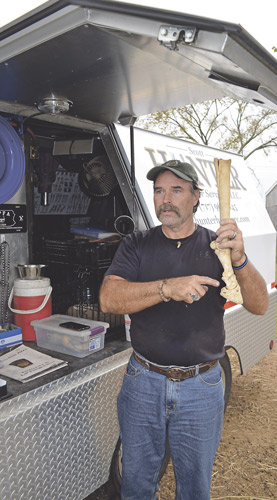 Like many horse maladies, navicular disease has more than one name, including navicular syndrome and podotrochlosis.

Ortved said the term “navicular” is the most common term because that’s the bone that shows up on X-rays. But soft tissue, which can also be part of the problem, doesn’t show up on X-rays. The vet can isolate forelimb lameness with a block to the foot, but X-rays might still be normal. MRI allows imaging of all the soft tissue, so a horse that was initially diagnosed with navicular disease can now be diagnosed more accurately as having a tear in the deep digital flexor tendon.

“We always say that 90 percent of forelimb lameness originates in the foot, and a lot of foot lameness we see originates in that part of the foot,” said Ortved. “It doesn’t necessarily mean the navicular bone itself – navicular syndrome has been expanded to include other structures in that area of the foot. We see a lot of it in Thoroughbreds, warmbloods, and Quarter horses.” While there’s no proof that navicular syndrome is inherited, certain conformation faults may lead to higher incidence.

One early sign of navicular syndrome is mild lameness, and early recognition provides a good opportunity to intervene. “Often, navicular syndrome occurs bilaterally in the front feet,” said Ortved. “One foot might be worse than the other, and that’s the one the horse is limping on, or you notice a shorter stride or unwillingness to land after a jump. Some horses show an exaggerated response when they’re on hard ground.”

Diagnosing a horse with navicular syndrome usually starts with a (nerve) block to identify the source of pain, followed by X-rays. However, while X-rays can identify issues in the navicular bone itself, they can’t identify any other pathology or injury in that area. “If there are significant changes to the navicular bone on X-ray, there’s a solid answer,” said Ortved. “There may be other things going on, but you can definitely say the horse has a severe navicular issue. Or if X-rays show mild to moderate changes, we can do some treatments and use anti-inflammatories to see if horse responds.” 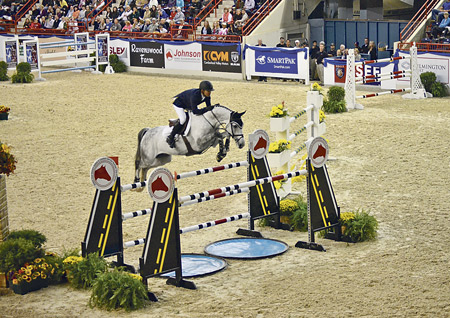 The role of MRI should be considered in terms of both necessity and expense, which can be significant. While some horses can undergo an MRI without sedation, many have to undergo general anesthesia, which means higher cost and hospitalization.

Recent data show significantly better outcomes in horses exhibiting foot lameness when MRIs are done early. “If the finances are there to support an MRI, the sooner the better – especially if you’re questioning the diagnosis,” said Ortved. “It allows a more clear understanding of what’s going on in the foot and allows you to target treatment more appropriately.” While costs vary, Ortved estimates that in the Northeast, a standing MRI without sedation is usually $2,500 per foot, and up to $3,500 for an MRI under general anesthesia.

Ortved said the fact that horses are athletes makes it difficult to prevent navicular syndrome. “I think you can takes steps to limit the impact and concussive forces on the foot, like avoiding riding on hard ground, which also helps prevent sole bruising,” she said. “Good shoeing and trimming is key. Horses with excessively long toes put more pressure on the deep digital flexor tendon, and that hits the back of the navicular bone and causes damage.”

Pat Reilly, chief of farrier services at the University of Pennsylvania’s New Bolton Center, has worked extensively with competition horses for 25 years and said good outcomes in treating navicular syndrome are more likely when vets and farriers work together. He added that despite scientific improvements and approaches in shoeing, there is still some art involved in treatment.

“A lot of people come to the farrier first,” said Reilly, “but without a diagnosis, we can make a situation worse instead of better. If I put a bar shoe on a horse that has a little bit of lameness, I’m changing the distribution of force on that foot, and it might make the horse better – but it could make the horse worse. As a farrier, my goal is to take whatever structures the vet identifies as pathologic and try to take some of the force off those structures. Without a diagnosis, I’m operating in the dark.”

Reilly said one word he doesn’t allow in his farrier shop is “balance.” “That suggests that we know exactly what we’re doing, and we don’t,” he said. “The second part of that is (assuming) things are going to stay where we put them – and they don’t. Horses’ feet grow. X-rays can be useful in identifying where the internal structures are, and especially in identifying distortion of the hoof capsule. Farriers have a tendency to focus on the outside of the foot, and we can fit shoes to distortion and not necessarily factor things like bony alignment and the position of the shoe relative to the center of articulation of the coffin bone.”

Ortved explained the use of bisphosphonates, drugs used in human medicine for degenerative bone conditions such as osteoporosis and bone fragility disorders. “Bisphosphonates stop or interfere with the activity of osteoclasts – the cells in bone that break down bone,” she said. “They secrete enzymes that break down the mineral material that makes up bone. The other cells in bone are osteoblasts, and those are responsible for making new bone material. In some navicular disorders, there is increased breakdown of bone without new bone being formed. In navicular syndrome, we see inappropriate breakdown of bone in response to impact.” Ortved added the role of bisphosphonates isn’t clear, but they offer a degree of analgesic effect, perhaps through opioid receptors.