A bright future for the dairy cattle industry

Dairy farming will always have traditional ties, but it’s people like Jacob Fisher who ensure a promising future. Mountain View Genetics, located in Warner, NH, is not your typical New England dairy farm. Their goal is to sell their herd’s genetics rather than sell milk. Jacob, along with his parents, exhibits their cattle across the U.S. at national level shows. When one of their animals wins their class, it raises in value and becomes desirable to their competitors. Many production dairy farms show their animals and sell their genetics as well, but the Fisher family has dedicated their efforts to solely genetics.

Jacob started his cattle career showing working steers as part of the Merrimack County Ox Bows 4-H Club. He bought all his bull calves through GMC Farm in Cornish, NH. GMC Farm has highly ranked cattle, which is how Jacob discovered his love of showing high-quality dairy cattle. The family bought their first Milking Shorthorn, Dots, in 2016, and have continued to grow their herd since then. 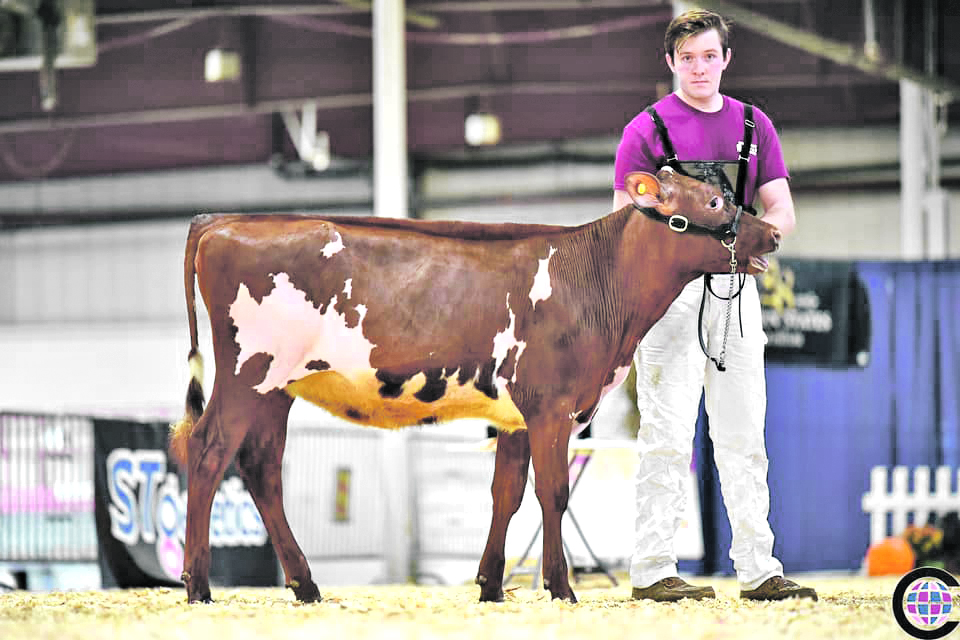 Brooke Clark, one of the partners at GMC Farm, showed him the path to Milking Shorthorns. This breed of cattle is recognized as one of the six major breeds of dairy cattle but is certainly less common than Holsteins or Jerseys. Milking Shorthorns originated from the dual-purpose Shorthorn breed. Hundreds of years ago, this single breed produced offspring that made quality beef and dairy and worked well in the fields with equipment. Shorthorns have since evolved to include two separate breeds: Milking Shorthorns and Beef Shorthorns.

A typical day in the life at Mountainview Genetics begins at 5 a.m. with chores. On average, they milk five cows at one time. Because of the way the milk market is structured, it’s difficult for the Fishers to sell their milk or turn it into a value-added product, so the milk is discarded at the end of chores. Something that sets them apart additionally from a conventional dairy farm is the amount of time spent with the cattle. Because their herd is small, each animal can receive individualized, custom care daily. The family knows the specific details of all the animals and can tell the second something is off with one of them. The cattle are additionally handled every day for leading, washing and clipping, to prepare for the next show.

When asked about the goals of the farm, Jacob said it was simple: “We want to continue to improve our genetics to breed and market desirable dairy show cattle. Specifically, we want to continue our breeding program to become more competitive each year at larger national shows.”

Jacob continued to say his favorite part about showing dairy cattle is being able to physically see and show off your hard work and be able to spend time with his friends and family at the shows. He has several mentors that helped his farm become the success that it is, including the crew at GMC Farm (Greg, Marcia and Brooke Clark), his cousins at Topline Farm (Scott, Randi and Emily Fisher), his parents and his aunt, who all have roles on the farm.

All those involved at Mountain View Genetics are incredibly humble, but their list of show ring accomplishments is nothing to hide. Some of their notable placings include six All American nominations, 12 Junior All-American nominations, Intermediate Milking Shorthorn at North American International Livestock Exposition in 2019, Junior Champion Milking Shorthorn at the Northeast National show in 2019, first four-year-old cow of the Open and Junior shows at NAILE in 2021 and Reserve Senior Champion of the Milking Shorthorn Junior show. The family is additionally proud that the Junior champion at the Northeast National was a home-bred animal, not bought from another farm.

Jacob is also furthering his involvement in the dairy industry outside of the show ring. He currently serves as the president of the UNH Dairy Club, is a junior member of the Milking Shorthorn Association and participated on the Junior Holstein Quiz Bowl team. He will graduate this December from UNH with an associate’s degree in applied animal science with a focus on dairy management. After graduation, he looks forward to exploring his options in the industry and implementing his new knowledge in his farm operations.