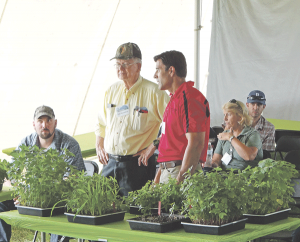 In one presentation, Bauer spoke to producers about the importance of preparing and caring for their soybean crop as they do with their corn. In a second presentation she spoke about factors to increase corn yields.

Bauer said many producers treat their soybeans as second best to corn, frequently neglecting the opportunity to increase soybean yield — and profit.

“I want to challenge your thinking on soybeans,” said Bauer, leading the audience through “the true systems approach.”

All information concerning your crop — including failures — should be documented. Accumulated information should be saved for reference when making future planting decisions.

Bauer emphasized that variety and selection targeted for your specific location are critical to improved yields.

“Where’s our biggest opportunity in beans? In my opinion it’s really focusing in on pods per-plant,” said Bauer, explaining there is “great opportunity” with soybeans by increasing the usual 2 or 3 pods per-plant that most producers are experiencing, to 5 or 6 pods per-plant, resulting in fatter, not taller plants, and bigger yields. Variety-genetics impact beans-per-pod and seed size.

Bauer said soybeans are extremely responsive to the environment, good or bad.

Scouting for symptoms of nutrient deficiencies is important.

Potassium deficiency will cause yellowing of margins. In severe cases, margins will turn brown.

Bauer said planting early is beneficial, but most farmers find excuses not to do it.

“I do think we have to think outside the box with beans. Be willing to try something that’s a little bit different — and learn,” Bauer advised.

“Wheat Pete” Johnson of Ontario delivered a presentation on recent challenging weather trends, and recognized that Gibberella is a serious risk for 2019 corn crops.

Gibberella, a common ear/ stalk rot pathogen of corn that can cause fatalities in animals and has been linked to cancer in rats, is riskier with late plantings and high humidity.

“Pay attention to humidity, not just rainfall,” he reminded attendees. “Foggy mornings mean the risk is there. Make sure your’re spraying fungicide at the right time.”

“Green silk is a must for application timing. It’s only a three to a five-day window, so you have to be ready and on your game. That’s the silk channel infection window, and that’s the worst infection type,” Johnson said.

Application should match the time when the majority of the crop would most benefit.

Although fungicides provide a yield benefit, Johnson said some products would impact DON levels. So, do your research before choosing your fungicide, since not all meet the same requirements.

He reminded producers to scout for disease and to watch for herbicide resistance in weeds.

“If you see a weed escape, please get it identified and tested. Waterhemp, fleabane, velvet leaf, you name it, sometimes they just got missed, but you don’t want them to spread.”

Hunter provided annual-grass specimens common to New York corn and soybean producers, for examination. Hand-lenses were also provided so that key characteristics, such as ligule type and hairs on stems and leaves, could easily be observed.

“It’s not easy to ID grass seedlings,” confirmed Hunter, recommending that all producers use hand-lenses to discern the identity of weeds while they are still small enough to control.

“With these hand lenses we can even tell the differences between foxtails when they’re small,” Hunter commented. “It could be a real mistake if you go out in the field and have the wrong ID.”

Wayne Conard of Ridgedale Farm, Montgomery County, reported problems in his area with nutsedge. “Once you’ve got it, it seems that you’ve got it forever,” remarked Conard.

Hunter recommended using the Weed ID Guide for Ontario Crops, by Mike Cowbrough for assistance with weed identification in the field.

Stanyard’s presentation focused on broadleaf identification, with key characteristics of specific seedlings examined. Differentiating between related species such as pigweeds was focused on.

Herbicide-resistant weeds, including tall waterhemp and Palmer amaranth, were discussed and emphasis is placed on learning to recognize herbicide classifications. 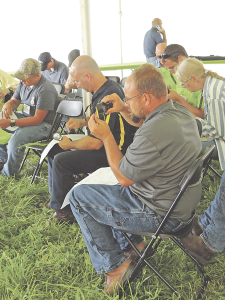 “Herbicide resistance is a very important topic that needs to be talked about on a daily basis with farmers as we are now finding some of these more difficult to control resistant weeds,” said Hunter. “There are resistant marestail and tall waterhemp populations in New York that are resistant to more than just glyphosate, and this complicates the issue. We talk about using herbicides with different sites of action and getting the right tank mixes so we can control these weeds effectively.”

Hunter reported Stanyard (who is also a member of the NYCSGA BOD) has taken the lead on tracking the spread of tall waterhemp throughout New York.

A recent, late-July discovery of tall waterhemp in Jefferson County brings the total number of counties in New York to 10.

“While significant to find this in Jefferson County there are many other counties with much bigger, widespread and established populations of this troublesome weed,” said Hunter.

He advised folks who see any uncontrollable weed, to contact their local CCE for assistance.

“Especially if it has survived or appears to be tolerating post-emergence applications of glyphosate (Roundup).”

Tall waterhemp and marestail are two major weeds resistant to glyphosate and ALS herbicide modes of action in Western and Central New York.

Hunter recognizes that many growers don’t attend educational meetings offered by CCE or local crop input suppliers and said those folks are difficult to reach with facts and updates — or the growing threat of resistant weeds on their farms.

“By the time they realize there might be a problem, it might be too late to do anything to control the weed,” Hunter remarked.

For more information go to https://nycornsoy.org/.