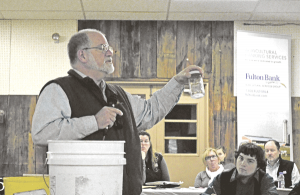 Earlier this year at the Northeast Tobacco Growers meeting in Quarryville, PA, hosted by Troop Consulting Services, Grant Troop enlightened his audience about understanding soil test reports. “What a year [2018] we had, with all that rain,” he began. “Tobacco doesn’t particularly like it wet. We highly recommend that you get a full-spectrum soil test.” Full-spectrum analyzes the sample for organic matter and micronutrient content. Such testing establishes the baselines so critical to advancing soil fertility management. It also provides information necessary for nutrient ratio manipulation.

The Cation Exchange Capacity (CEC) is a measure of the soil’s capacity to hold and release positively charged elements. Soils with low CEC (sandy soils) have a low capacity to feed a crop (a small bucket) which means spoon-feeding to attain a high-yield goal. Soils with high CEC (clay soils) have a high capacity to feed a crop (big bucket). Most mid-Atlantic agricultural soils are medium CEC – silt loam type soils or a medium bucket.

“It is difficult for us to make tobacco fertility recommendations because of all the variables,” said Little Britain Ag Supply’s Andrew LeFever. “Where are you placing this tobacco? What type are you growing? What’s the background of soil fertility? How much manure did you put on the soil? What was the crop last year? What are your management practices? In-season weather affects all of that.”

In 2012, North Carolina State University had some tobacco research plots where they put lime on “probably first year tobacco crops,” LeFever said, “to adjust proper soil pH.” Others received no lime. Limed tobacco crops out-performed other plots in higher yields. This was regardless of the nitrogen rate; additional nitrogen cannot overcome the negative effects of low soil pH. “If your pH is low you can put on as much nitrogen as you want. The yield is still not going to be as high as if the pH is correct.” Nitrogen has a greater effect on tobacco yield and quality than any other nutrient. Burley and dark tobacco require more nitrogen (150 – 276 pounds per acre).

“Burley and dark tobacco grown in some areas in this country, whether it’s in Pennsylvania or Kentucky or Tennessee, has seen a historical over-application of nitrogen,” LeFever said. “Too little nitrogen, of course, will reduce yield and leaf quality in terms of color and a slick-cured leaf.” Slick-cured, according to one farmer in attendance, means it isn’t “sticky” enough, or there’s not enough tar in it. Too much nitrogen, on the other hand, might mean an undesirably high yield in terms of harvest issues and curing issues. Delayed maturity might be another consequence, as well as a longer required curing time, or what’s called the “unripe leaf.” Increased sucker growth could necessitate more MH30.

“Pest pressure is likely to be increased,” LeFever said, “particularly with hornworms and aphids.” Factors influencing the recommended nitrogen rate include the type of tobacco and where it is being grown and on what type of soil (whether you are on a Berks or a Penn, where the parent material is primarily shale, or Duffield and Conestoga, which is parented by a combination of limestone and shale, or a Chester and Glenelg, where the parent material is very different, possibly igneous or metamorphic rock). Manure is also a factor. As an example, LeFever said, “Let’s say you’re growing burley tobacco after corn on a poorly-drained soil down in southern Pennsylvania. You will have a higher nitrogen requirement. On the other hand, if you’re growing PA 41 tobacco in northern Pennsylvania following soybeans on a well-drained soil, that means a lower nitrogen requirement.”

Speaker Michael Myers addressed herbicides and weed control. Touting Command 3ME, Myers explained that two-thirds of a pint to a pint and a half can successfully control barnyard grass, giant foxtail, goosegrass, large crabgrass, seedling johnsongrass, prickly sida and velvetleaf, among others. 3ME herbicide may be utilized as a soil-applied treatment prior to weed emergence for the control of annual grass and broadleaf weeds in tobacco. Myers cautioned growers to be aware of special restrictions surrounding “drift” – airborne contamination. Application instructions on the label clearly state that failure to observe the directions of the label may result in injury to sensitive plants: “Foliar contact with spray drift or vapors may cause whitening or yellowing of sensitive plants … Observe all buffer restrictions. Before application, observe air movement and direction.”

John Cranmer is a tech representative from Valent. He was on hand to tout the virtues of Valor SX, a dry formulation, and Valor EZ, the liquid version of SX, both for use with tobacco. “Valor has a very strong residual control for broadleaf weeds,” said Cranmer. “It can last from four to six weeks at a two-ounce rate.” It also protects against a wider spectrum including broadleaf weeds such as Palmer, waterhemp and lambsquarters. And it offers rotational flexibility with no carryover concerns. “This is key,” said Cranmer, “because you can apply this and then all of a sudden change your mind and put something else in that ground instead of tobacco. You can rotate to soybeans, corn, sorghum – all very easy to do with this product.”

Cranmer noted Valent has three insecticides currently in use for tobacco: DiPel DF (dry formulation) which deals with tobacco budworms, hornworms and moths; DiPel ES (liquid formulation) for the tobacco looper as well as the aforementioned pests; and DiPel 10G (granular formulation) which concentrates on the budworm.