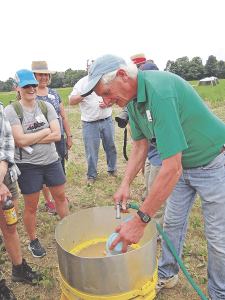 Integrated Pest Management (IPM) Award recipient Mike Hunter spoke to attendees about weed control in soybeans, with an emphasis on identifying and controlling herbicide-resistant weeds. “We’ve got to start spraying, really, by numbers now,” Hunter advised, explaining studies show some weeds with resistance to multiple sites of action. “We have a lot of glyphosate-resistant and ALS-resistant marestail in New York State, and that’s been difficult to deal with and it’s changed a lot of how we deal with soybeans and soybean weed controls.”

“That’s going to be a big challenge as well, as we move forward,” commented Hunter.

Hunter reported that populations of tall waterhemp in New York State have been found that have multiple resistance to three different groups: group 9, glyphosate; group 5, triazine; and group 2, ALS herbicide.

Losing effectiveness of these “tools” in soybean crops has forced stringent management including looking at and getting to know sites of action. “We’ve got to start spraying really by numbers now,” Hunter emphasized, referring to Russ Hahn’s advice over the years. “He kept trying to hammer it into our heads and he kept using these group numbers… Now, that’s what we’re doing.”

Any weeds that do not respond to treatments are suspect for resistance. Hunter emphasized the importance of contacting Extension agents and getting these weeds identified and tested for resistance.

“Our group 15 is going to be important as we go to manage tall waterhemp in soybeans,” Hunter said. “I think a lot of it is going to be two applications. We have to stop seed production of tall waterhemp. It will continue to produce seeds through the whole season. It’s important that we’re going to come back in and we’re going to lay down another residual and/or another contact in there. You’re going to have multiple sites of action in the second pass as well. It’s a challenge for growers. It’s certainly going to add to the cost of growing soybeans.”

“Combining clean-up” to help stop movement of seed between fields is important to consider. Hunter referred producers to fieldcrops.cals.cornell.edu for more information.

Hunter remarked that another challenge is on the rise, as Palmer amaranth has also been discovered in New York State.

Jodi Putman, a field crops specialist of the NWNY Dairy, Livestock and Field Crops Team, discussed the importance of sulfur as a nutrient in New York soybean production and displayed plants that had been in controlled experiments to provide a visual example. Putman said sulfur plays a critical role in plant growth, building protein and enzymes.

Sulfur-deficient plants may appear to be suffering from other conditions. They appear to be lighter green and may look frost-burned.

Putman provided attendees with an agronomy fact sheet providing information on application requirements and testing methods. Information may be found at nmsp.cals.cornell.edu .

“This entire technology was developed against the alfalfa snout beetle in the northern part of New York. Hopefully you’ll never have to deal with that insect. There have been 20,000 acres inoculated at a single time. We have shown that a single inoculation lasts in the alfalfa-corn rotation for 10 years.” 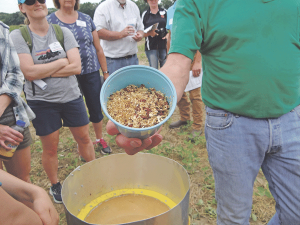 Shields said after 10 years of 50,000 samples from 75 fields, results continue to be consistently positive. He explained that this nematode species are natives of the Northeast, with genetics evolving in this region and continuing to evolve and thrive in these environmental and agricultural conditions.

Shields demonstrated how to mix a small container of prepackaged nematodes into water and sift out all packaging contents (such as sawdust) while retaining the tiny organisms. “In this cup are 25 million nematodes,” said Shields, holding up a small container.

He explained that since nematodes readily multiply and acclimate, they spread out, feeding on snout beetles. They remain active in the soil indefinitely, guarding against future attacks.

Studies are also showing positive results using nematodes as a successful biological control against other insect pests, including corn rootworm (CRW). Studies in Texas report “significant reduction” of CRW and resulting root damage. Other trials have been ongoing in Michigan, New Mexico and Ohio. Ground application and center pivot irrigation systems have both been used. Shields spearheads research on applying nematodes mixed in with liquid manure.

Reports show some time limitations of nematode survival in that environment. However, this is still being studied.

Dr. Jerry Cherney reported on hand-held, near-infrared spectroscopy (NIRS) instruments and their use in agriculture and for feed and forage analysis. “In the 1970s they started measuring soybean protein with NIRS. In the early 1980s, I started doing forage crops,” he said.

Cherney said this technology is used to detect protein, moisture, fiber and more. “You can calibrate the instrument and get very good numbers for predicting,” he reported.

Although NIRS instruments have been used in laboratories for several decades, hand-held units have only been available for about five years and are thought to be robust enough for field work.

Cherney said although the NIRS tools look large (although smaller sizes are in the works), they are basically scanning a very small area. Another issue is moisture. “Moisture basically interferes with NIRS measurement. The question is can these units accurately function out in the field, and if you’re at a silage bunk and it’s 10 below zero, what happens?” he asked. “It’s probably not going to work, because there is a certain temperature range that you need to be at.”

Dairy farmers are interested in NIRS for detecting values of total mixed rations to prevent underfeeding and overfeeding, and studies of daily samples taken from bunkers around New York State are continuing to help determine whether these devices are cost effective for dairy farms, as cost is another factor to consider. Some NIRS devices are the price of a new vehicle or a small house.

Cherney said companies will tell you that even though the instrument may be more than $20,000, if you can use it to rebalance your rations on a daily basis, it will eventually pay for itself. “If the instrument can actually measure accurately enough to do the job,” Cherney added, remarking that bigger herds are more likely to benefit.

“We are testing them and how accurate they are, by testing them ourselves. Right now we don’t really know what the status is of these things,” Cherney concluded.