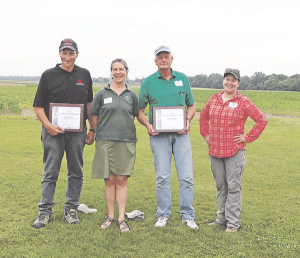 Hunter is well known for his work with weed management, including herbicide-resistant weeds such as marestail (horseweed), tall waterhemp and Palmer amaranth; testing for new resistance continually.

Hunter is also regarded as a leader in his work with Western Bean Cutworm (WBC), and is an advocate for biological control of alfalfa-snout beetles.

Shields has been applauded far and wide for his research and work with native entomopathogenic nematodes (EPNs) and has had a huge impact as far away as Texas and New Mexico, where he led a team effort, transporting 23 billion native NY EPNs for field application on farms suffering from Western Corn Rootworm (WCR) damage.

Shields has worked extensively in New York State teaching farmers to control alfalfa-snout beetles, with tremendous success and positive results continuing — even six years after only a single application of nematodes.

“The science built and proven in Northern New York over the course of more than 30 years for using the native nematodes as a crop pest bio-control has steadily expanded to help farmers across New York State and other states and to address pest issues in multiple crops,” said Shields. “The expansion of this cost-effective, easy-to-apply management practice would not be possible were it not for the long-term commitment the farmers of Northern New York needed to develop the science to support a solution for snout beetle.”

Both Hunter and Shields have worked extensively reaching out to farmers; teaching them and their families, while advocating the use of biological control whenever possible on farms.

“The award honors individuals who encourage the adoption of IPM in their businesses, schools, communities, and farms, and who develop new tools and tactics for sharing these practices,” said Jaime Cummings, Field Crops and Livestock IPM Coordinator.

Hunter and Shields were speakers at the annual field day event, joining in with other researchers and sharing updates on crop management and new, ongoing studies of hemp, malting barley, and Kernza — a perennial grain. Using an NIRS device, bird control in corn, and sulfur as a limiting nutrient in New York soybean production, were topics also reported on.

Forecasting which cultivar of cannabis to choose or what variety of malting barley to plant is difficult, as even tolerant varieties are impacted by unpredictable weather conditions.

Fusarium head blight (FHB), or scab, is a concern — even with hemp. This destructive disease, thrives in humid conditions, and will frequently contaminate small grains with mycotoxins.

Deoxynivalenol (DON), a vomitoxin, considered to be the primary mycotoxin associated with FHB, is subject to strict regulatory limits with the USDA.

FHB/ Scab is wind-borne and spreads rapidly. It is best to consult with your local extension agent before investing and making decisions on planting these crops without consultation.

Free alerts for risk of scab in your region can be accessed at https://scabusa.org/fhb_alerts.

Mold in the hemp plots had been found. Some plots were re-planted and some recently planted late, due to weather-related incidence. Even so, several attendees noted that the crop was already 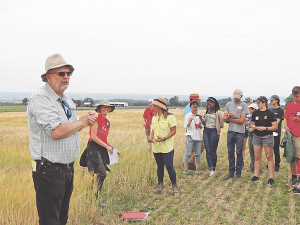 Bergstrom said duel-use cultivars for industrial fiber and grain, with different varieties and different genetics, are being trialed at the site. “We’re very heavily in the learning stage,” remarked Bergstrom. “We’re really getting to know what pest and disease issues we should expect as the acreage expands.”

Bergstrom said the good news is that once the crop gets established, “it grows like a weed. It can out-compete an awful lot of the problems we’ve run into.”

However, he wonders where hemp crops will fit into crop-rotation in New York, whether typical cash grain rotation, a vegetable crop rotation, or a typical dairy-type rotation.

“The bad news is this crop is extremely susceptible to white mold,” he added.

“So, we’re going to have to be very cautious of rotating after soybeans, vegetable legumes, cabbage and a number of things like that. Really be conscience of what the diseases are on some of those other things,” he advised.

There are no labeled pesticides or fungicides at this time. This includes terms such as insecticides and herbicides. Bergstrom looks to the future for seed treatments with this crop. Getting the crop established and ensuring quality is key with this crop.

Grey-mold is another issue. Although it does not produce toxins, it seriously hinders quality and yield once it is established and impacts both field and greenhouse crops. “We’re going to have to learn how to deal with that,” commented Bergstrom, asking again, “Is this going to be a logical crop to plant after corn and small grains? We’ve got some real question marks.”

Diminishing the impact of late-season diseases, such as Grey-mold, FHB/ Scab, and mycotoxins is the goal at the facility.

Jaime Cummings, Field Crops and Livestock IPM Coordinator, spoke to attendees about results in studies on the use of Avipel Shield Bird Repellent in corn crops.

Cummings remarked that sometimes early bird damage is so severe that farmers are forced to replant cornfields, causing extra expense and labor. “It can be really inconsistent from year-to-year, and from field-to-field. It’s unpredictable.”

Situations where bird damage is most frequently found are where there are roosting areas close by.

Shallow plantings are also prey for flocks of birds.

Pilot studies of Avipel Shield Bird Repellent have had significant, positive results. This is a natural, non-toxic, seed treatment that does not kill the birds, but does cause them to get sick and motivates them to move on.

Cummings reported that this seed treatment is compatible with other conventional seed treatments that may be already in place. This treatment can be commercially applied or applied with a dry hopper box formulation. “Growers don’t have to treat every single seed that goes into the field,” said Cummings. “Data shows this works.”

Kernza, a recently developed grain developed by the Land Institute in Salina, KS, like most perennials, has an environmentally friendly deep-root system that helps prevent erosion and reduces runoff.

The nutty flavor and texture has reportedly caught the interest of restaurants, bakeries and brewers — and even attracted attention from General Mills, contributors of $500,000 for research into climate impact, production and breeding of Kernza grain. 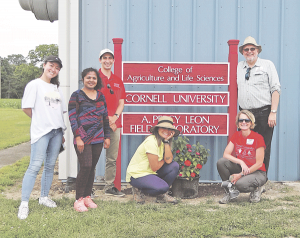 Although the yield is a bit less than desired, Ryan said raising Kernza could be an economically sound decision, as it can serve a dual purpose as forage and grain. He explained that Kernza can be inter-cropped with legumes. Marketed as a specialty crop, it will demand a higher price than conventional small grains. Currently Ryan sees an increased demand — and a lack of supply.

“We are going to see more and more products that are incorporating perennial grains into them,” he predicts.