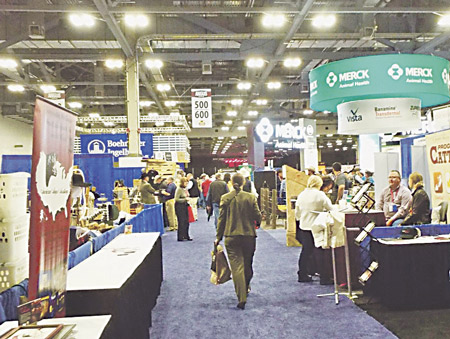 The 2018 American Angus Association National Convention and Trade Show welcomed visitors to Columbus, Ohio, Nov. 3 – 5. This year’s convention celebrated two important milestones within the Angus Association: the 135th Annual Convention of Delegates and the 40th anniversary of the Certified Angus Beef brand. The American Angus Association is the largest beef breed organization in the U.S., with a worldwide base of more than 25,000 members and cattle registrations that grow by nearly 300,000 animals yearly. Columbus was selected as the location of the convention partly because of its close proximity to the National Headquarters of Certified Angus Beef in Wooster, Ohio, but also as a nod to the 100th anniversary of the Ohio Angus Association and the important role the state has played in the marketing and development of the Angus breed. In recognition of this honor, Ohio Governor John R. Kasich declared Nov. 3 to be American Angus Day.

The general session began on Saturday, Nov. 3, heralding the successes and achievements that the American Angus Association accomplished in 2018. Angus Association Chief Executive Officer Allen Moczygemba and Certified Angus Beef President John Stika emphasized the significance of the 40th anniversary of the Certified Angus Beef (CAB) brand and the positive impact that it’s had on the growth of the Angus breed. “In the 1970s, Angus registrations were dropping because beef quality standards were dropping to meet the demands of so-called commodity beef,” Moczygemba explained. “In 1978, Certified Angus Beef was launched and became the world’s first premium beef brand – the brand that changed beef.”

The journey of CAB continued with Stika. “Certified Angus Beef has influenced the cattle industry by raising the consumer’s awareness of quality. Now we have aligned the consumer with the producer’s ability to deliver cattle capable of meeting the quality requirements of CAB.” Stika and Moczygemba agreed that CAB still had much to accomplish. “Today, 95 percent of consumers recognize the CAB logo,” said Stika. “We have positioned ourselves to achieve true brand loyalty.”

The fourth annual Angus Genetics Symposium followed the general session. Genetics are a key factor in the ability of Angus cattle to adapt to the demands of modern consumer and the American Angus Association boasts the largest collection of genomic data in any beef breed. To give perspective on the importance of genetic data, Dr. Spencer Wells, a well-known human geneticist, anthropologist and explorer-in-residence with the National Geographic Society, was selected as keynote speaker. Wells explained how genetic information relates to modern human beings and traces their migration out of Africa and throughout the world. Following Wells, CAB Vice President of Supply Mark McCully demonstrated how advances in genetics translate into higher consumer beef quality.

Following a lunch featuring Certified Angus Beef, the tradeshow opened with more than 100 cattle industry exhibitors plus unique retail vendors. Saturday afternoon brought the first of many educational workshops and live animal demonstrations, with timely, wide-ranging topics such as succession planning and understanding PAP (bovine pulmonary hypertension) scores. The candidate forum highlighted the evening session with speeches from each person running for the association’s board of directors.